What is the collective noun for a group of travel agents? A crew, a squad or perhaps a troop? For many travellers who found their travel plans thwarted by the Coronavirus pandemic, the experience served as a vivid illustration of the value in working with an experienced travel professional – or more accurately, an entire team of travel professionals.

Amid a complex and ever-evolving situation, TravelManagers says its clients have benefited from the support and assistance of not just their own personal travel managers (PTMs), but also of their network of more than 600 colleagues. One such collaborative effort came about when PTM Tamara Tiffin received a late-night call from the mother of a client who was travelling in regional Vietnam and had realised that there was an urgent need to return to Australia while it was still possible.

“After checking on the available options and running them through with my fellow Northern Rivers PTMs, I advised my client that she would be able to travel home via Taipei,” explains Tamara, who is TravelManagers’ representative for Kyogle in northern New South Wales. “Communicating via Facebook Messenger, we made plans for her to hop on a train from Nha Trang to Saigon that night. She would then connect to what I understood was the best possible flight option home – travelling via Taipei at midday the next day.”

The client’s ticket was issued, Tamara updated her colleagues on her progress, thanked them for their assistance, and then logged off.

“Feeling happy and relieved that I’d been able to resolve the situation for my client, I was ready to spend a quiet evening with my family,” she notes. “It was my daughter who noticed my mobile phone, now set to silent for the night, manically flashing as my fellow PTMs frantically attempted to reach me.”

Tamara’s colleagues were alerting her that an updated transit policy meant her client would not be able to travel through Taipei as planned. They gave her advice on how to void the original ticket and reissue a replacement with a new routing via Japan.

However, it was not to be entirely smooth sailing from here for Tamara’s client, who arrived in Saigon to a city in lockdown. With no taxis to be found and an increasingly hostile reception from the locals, the client once again turned to Tiffin for help.

“Once again, I reached out to my colleagues via our Facebook group, and once again, they came to the rescue, providing personal contacts who were able to drive my client to the airport safely.”

Tamara says her client was required to spend 16 hours in transit at Tokyo’s Haneda International Airport enroute to Australia and arrived to find that there were no shops open. Advice once again came through from Tiffin’s PTM group, reassuring her that she should sit tight as the shops would open at 10 am. 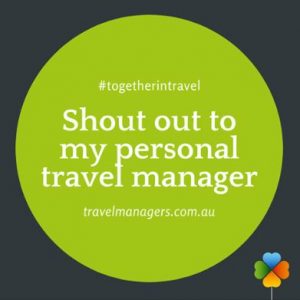 “Sure enough, at 10 am the shops opened, and my client was able to buy herself a cup of coffee and something to eat. Her journey home was long, tiring and at times incredibly stressful, but knowing that she had not just one but a whole bunch of experts supporting her every step of the way was incredibly reassuring.”

“There is a misconception that home-based travel agents must by definition be isolated from colleagues, and that they miss out on the camaraderie and teamwork that exists in more traditional office environments,” he explains. “Nothing could be further from the truth.”

In Tamara’s case, the client was delighted to arrive back in Australia safe and sound, at which point she entered a mandatory period of hotel quarantine. She sent Tamara a Bunnings voucher as a thank-you for her efforts.

“I think I will buy a tree and plant it to remind me of the time that my fellow PTMs helped me to get my client out of Vietnam!” she reports. “With their support, I was able to keep my client updated with real-time, practical advice every step of the way.”