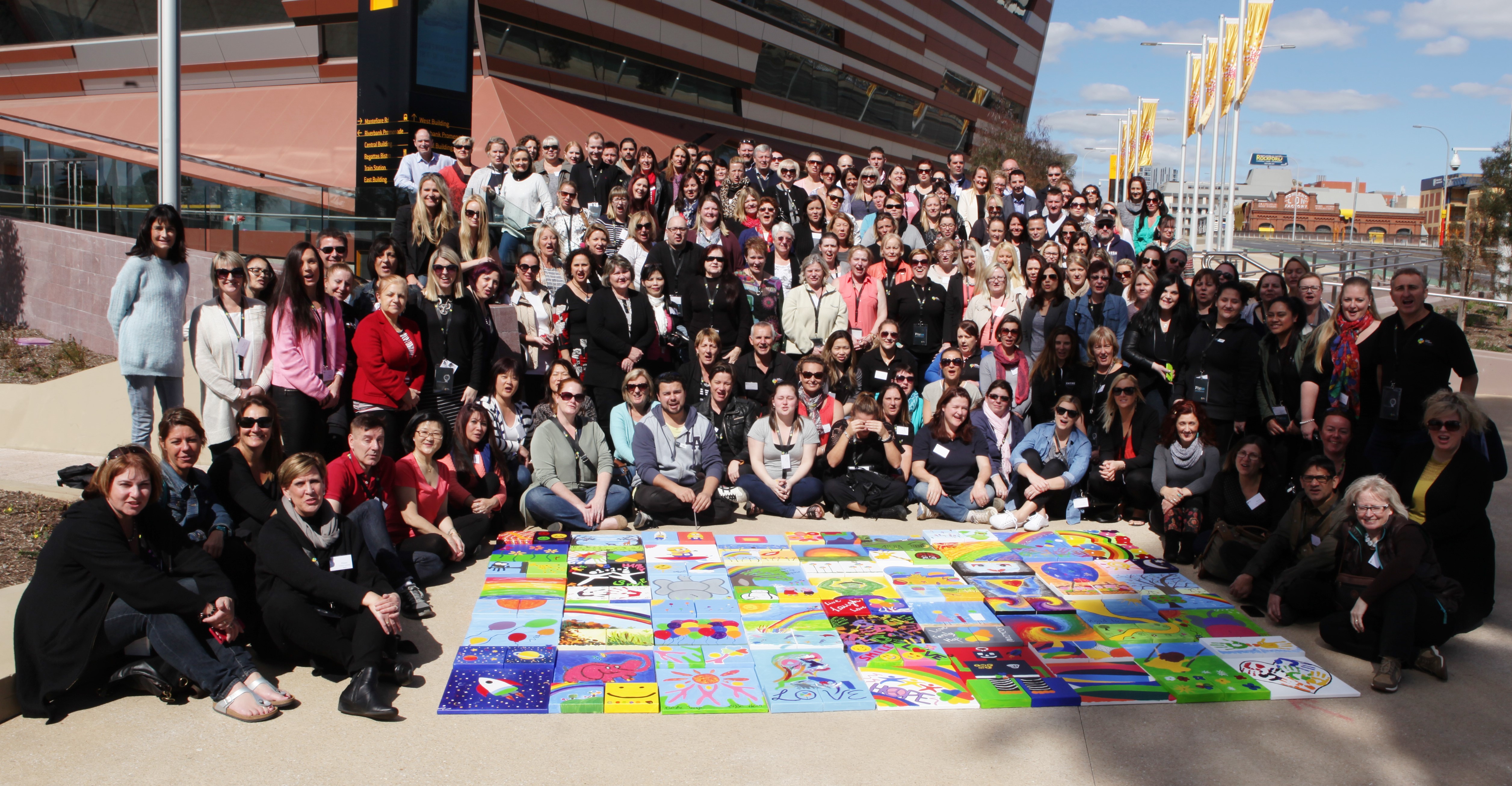 As the saying goes ‘all good things take time’ and something new and bright has caught the children’s attention at the foyer of the Centre for Robotics and Innovation at the Adelaide Women and Children’s Hospital (AWCH), two years after it was created.

The collage of bright art mosaics, which were completed as part of the 2015 TravelManagers conference community event supporting the South Australia-based charity, Little Heroes has brought smiles to the sick children who visit the centre.

Chris McDermott, founder Little Heroes explains the delay in displaying the artwork was simply due to following Occupational Health and Safety (OHS) requirements.

“The Centre is relatively high risk as it deals with fragile children so all precautions need to be taken and approvals were needed from relevant parties for the erection due to OHS requirements. Once they were ticked off we could install the two mosaics and we have had great feedback ever since. It has made a very clinical space look fantastic, it’s very relaxing and interesting for the kids and their families.”

In addition to creating the artwork of mosaics, TravelManagers through a charity auction and dinner raised $16,000 in funds which were donated to Little Heroes during the company’s 2015 conference in Adelaide. “The money raised from TravelManagers allowed us to complete the Robotics Centre and have it up and running as soon as possible. It has also allowed the hospital to show it off to doctors and hospitals from all around the world, looking to replicate it in their home cities. The AWCH has also been approached by doctors in Australia wanting to do research with the use of the Robotic Centre and we are also looking at purchasing other Robotic equipment for the Centre which helps children with neurological disabilities to improve their motor skills and get them out of hospital more quickly.”

The TravelManagers support has been welcomed for more reasons than one.

“The Little Heroes Foundation is in debt to TravelManagers not just for their finished products of art work or their cash donation but also for their energy and support of Little Heroes at such a crucial time.  The heath landscape here in South Australia is changing rapidly and the TravelManagers support arrived at the right time to get our fundraising target of $2 million dollars over the line. The Centre opened soon after and the kids benefited immediately.”

Each year whether it be offshore of at home, TravelManagers participate in a local community project at their annual conference.

“The strongest message for TravelManagers is the culture of our business and our desire to give back to the community. The opportunity for our personal travel managers to do something that benefits the community mirrors our business philosophy of going the extra mile.  To know that our artwork has brought smiles to South Australian sick children and that our funds have made a real difference to their lives has really warmed our hearts. That sums up the culture of TravelManagers and we are extremely proud of that,” says TravelManagers Executive General Manager Michael Gazal.