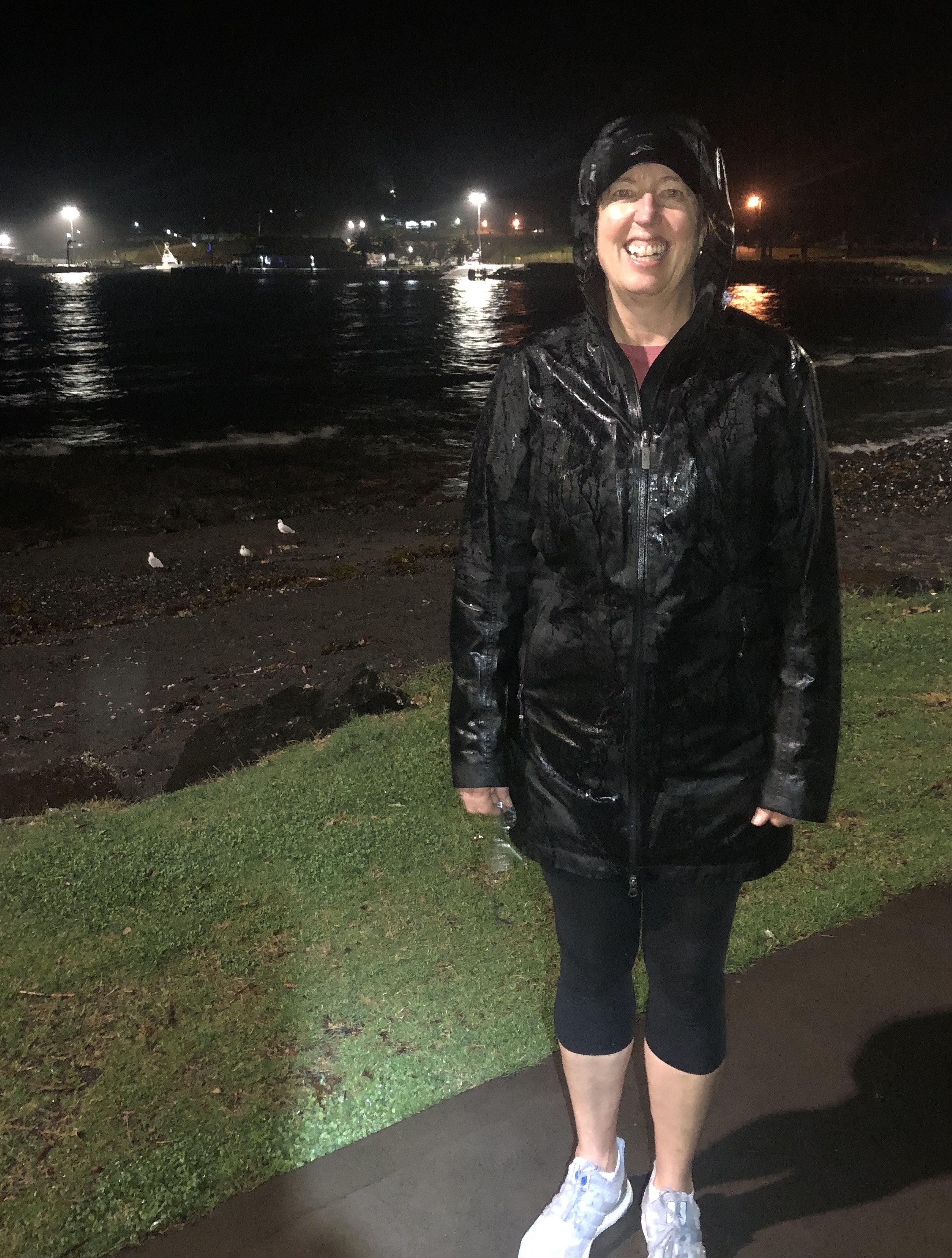 Photo: A late fall of rain was not going to prevent PTM Annette McHugh from reaching her goal of 100,000 steps in the final week of TravelManagers’ NSW/ACT walking challenge.

A unique walking challenge among TravelManagers’ New South Wales and ACT-based personal travel managers (PTMs) has fired up competitive spirits, resulting in some impressive statistics and a useful database of self-drive itineraries.

“Julia and Troy are both avid walkers themselves,” Gazal explains. “With the continuing NSW lockdown, they wanted to create a challenge that would benefit the physical and mental wellbeing of our people.”

Each week, PTMs and NPO team members provided their steps tallies, which McLean and Coelho converted to distances using an online conversion tool. The weekly results were then published and participants invited to recommend NSW self-drive itineraries that covered equivalent distances.

“Participants did not have to take part in the walking aspect of the challenge to contribute their suggested itineraries,” Gazal clarifies. “We now have an extensive database that will be highly useful for PTMs as domestic travel makes a welcome return.”

The PTM who recorded the most steps over the five-week campaign was Julianne Gazal-Rizk: TravelManagers’ representative for Willoughby NSW. Having achieved in the number one spot on three out of the five weeks, her impressive performance of 722,487 steps converts to a distance of 550 kilometres – an average of more than 100 kilometres per week.

Gazal says the publication of a weekly leader board served as highly effective motivation for the participants: “PTM Annette McHugh was so determined to get over the 100,000-step mark in the last week that she even went out walking in the rain on the final Saturday night.”

In week one, Gazal reports that four of the top ten participants walked more than 100,000 steps, and by week five, all of the top ten were hitting this milestone. Among that group was PTM Danielle Goncalves, representative for Alexandria, who finished the challenge in seventh place with a total of 496,166 steps.

“The challenge was a lot of fun, and the itinerary tool is brilliant – I’m very grateful to Julia and Troy for organising it,” she reports. “I am so impressed at those people who made it to 150,000 steps in a week – that is a lot of steps!”

Marlene Lane was among the NPO team members who took on the challenge: she says she’s looking forward to the reopening of domestic travel so that she can experience some of the self-drive itineraries for herself.

“Although I felt my steps didn’t contribute much, it was great to have a goal to aspire to,” she adds. “It’s been fun to watch the leader board and it’s amazing to see the distance around Australia that has been walked.”

Over the five-week period, Gazal says the 30 participants racked up a combined total of 9,195,550 steps: the equivalent of 7007 kilometres walked.

“To put that distance into perspective, that’s the equivalent of walking Sydney – Melbourne – Adelaide – Alice Springs – Darwin – Broome, and still having nearly 500 kilometres to spare!”

The NSW/ACT-based initiative has been such a hit with PTMs that Gazal says the concept is now being extended to include the other states as a means of boosting morale and creating a nationwide database of itinerary options.

With the current record of 171,082 steps in a single week held by PTM Lori Francisco of South Windsor, NSW, Gazal is looking forward to seeing what can be achieved in a national challenge.

“The TravelManagers family is a close family, and like many families we are also highly competitive,” Gazal quips. “I think we can safely predict some great rivalry between individuals and state versus state!”